It is a (java based) tool to create application bundles for MaxOS X of old games. Old games – as in games that are run by emulation software.

Because I don’t like frontends, I don’t like having to look for the right config everytime I startup a game. I don’t want to run in compatibilty issues later and not knowing why because befor it worked allright etc.

It bundles a rom or otherwise “old” game with the emulator tightly together and builds an “app” of them that can be started by just a double click.
Each bundle is in itself sufficient, there is no need for any other software to be installed.

The configuration work only needs to be done once and can later be forgotten since it stays with exactly that game in that package.

What it can NOW

As of now I added support for 4 emulators (emulators – not systems!)

I don’t know what copyright law says, but I bundled the current versions of them WITH MacOneClick, I hope the authors don’t mind. If you do, give me a hint and I will withdraw them.
I bundled them with my program because that way I know for certain which version I have access to and which comand line parameters work to what end (authors might deny it, but something allways changes and breaks things). 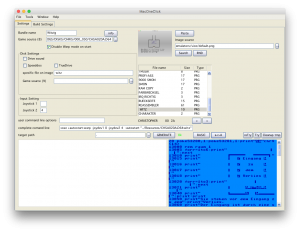 A few words what you see:

The other emulators look more or less the same, different parameter sets result in different layouts.

DosBox let me grow some gray hair, here you can give directories, disk images, floppy images, hdd images, iso images. Some figuring was in order to build the correct parameters correctly (although, UAE was not much better)

The minimal input is a source of a game, than press try – and see if it works – it just might straight out of the box!

Source code is in the structure of the app. Java is neccessary to start – but every Mac-user should have Java installed anyway.

Since I can’t allways do a blog when I just change a few bits – I’ll just update this page.

Having been able to dump a whole lot of old games with my new KryoFlex device – I did much Amiga-emulation the last days. There were many configurations to be done, and constant changes, to get the games and application running as I would like them. I used MacOneClick heavily as a frontend, since by now it has all major settings I need, can copy all emulation files when needed – or use a  “base” directory (see last update).

Mac One Click does sort of work as my frontend of choice now, because I know by heart what and how I can do with it, its flexible as hell (since if it doesn’t support what I need – I just enhance it).

Anyway – the “core” new element I did the last two days (for FS-UAE and DOSBOX) is save all settings! Doesn’t sound like much – but this is in the core the enabler to use the tool as a frontend.

It was quite quickly done using a derby database. For each emulator I created a table and read and write all data via SQL, elegant, quick, easy and understandable. And – since some time ago I did a database tool, I can even “debug” or change the DB from within (or from outside) since a derby DB is easily accessable.

The only point remaining is, that there are so FEW emulators out there (MAC) that can be configured from command line or via a configurable properties file. Otherwise I would have added tons of other emulators by now.

Some Features, that are noteworthy (not useful mind you) :-):