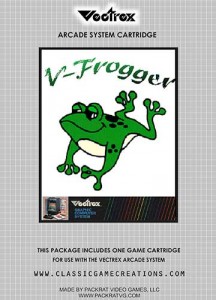 It started as a project to improve DVE, but the further I went on, it was clear that I would be doing a full game for the vectrex system.

VFrogger was created somewhere around 1998ish and from start of  it was released to be public domain.

Other people endeavored to make hardware (cartridge) or enhancing software (overlays). To the left you see the box art created (Mark Shaker, wasn’t it?).

Following are the original releasenotes: