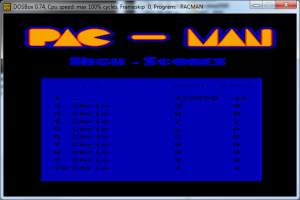 In the early 90ies of the last millenium, I converted from being a Commodore Amiga guy to being a PC guy. There were a couple of games I thoroughly missed.

One of the being the more than excellent Pacman version done by Edgar M. Vigdal (who sadly passed away this April, R.I.P.).

I did not find a single version of Pacman as a PC-compatible game, that came even NEAR his rendition.

Being a newbie to PC programming I chose that my first project on a PC should be a tribute to that game.

As you may notice my version of the game is in places very similar to that of Edgars. Although he later produced even better versions (using AGA e.g.).

I programmed Pacman in C with some hand made assembler routines for graphics.  The graphics are rendered in something that was than called modeX, a special mode that had a strange resolution of I think it was 320×400 pixels.

The game was programmed quite fast in a couple of weeks, but over the years I kept tweaking it slightly. The levels for example were not integrated into the game, but could be loaded from files which could be edited and made by users, the files are in an ascii-text format.

Since this game was a DOS game, the corresponding code page and font must be used (OEM 850) – but than you can still create your own levels. 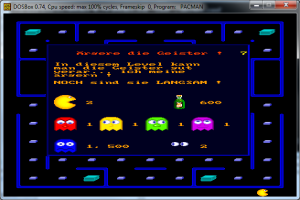 The last version had about 50 different (and some quite difficult) levels. 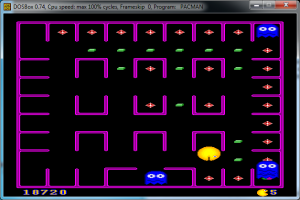 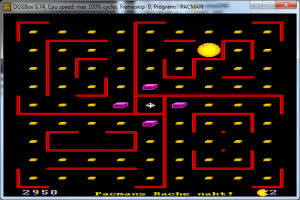 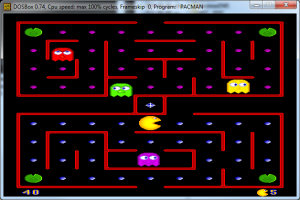 On some conditions you could enter bonus levels and earn HUGE points! 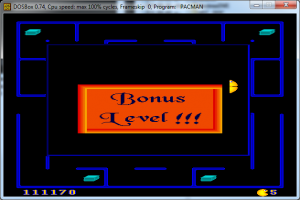 There were many different fruits that Pacman could eat and even quite a few “enhancers”. 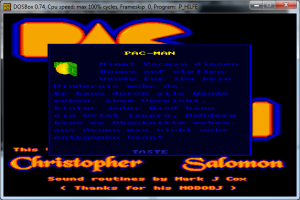 Like this one, where Pacman is enabled to move thru the walls.

There was an extensive help available (as a seperate EXE), which explained in detail all enhancers, bonus, command line parameters, and optional switches that were available.

For each set of options there were different (persistent) high score tables.
(depending e.g. on the number of lives you started with, on the ghost behaviours… etc)

There even was an option that allowed you to record your game and play it back, or save the game and replay it later :-). With that feature I enabled a “demo” mode, which shows how I played each level without dying… 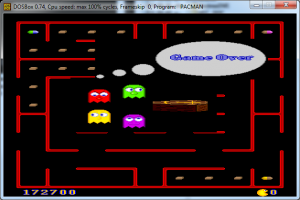 (You can find my old pages made for AOL also on this site at: Old Pacman Pages)

And finaly the source code to Pacman, it was last compiled 1997 using Borland C++ 3.1: Pacman Sourcecode
(The above binary is somewhat newer, it was compiled with Watcom compiler 10.6, using protected mode, but as of now, I have not found the correct sources…)

Little fun fact… Pacman was collected into a shareware book. Either the author wanted to protect me or himself by not using the name PACMAN, or he didn’t get the name right.

Anyway, here you can see Pack-man: 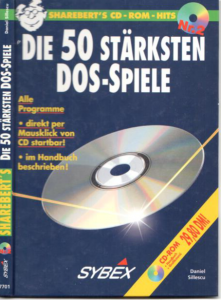 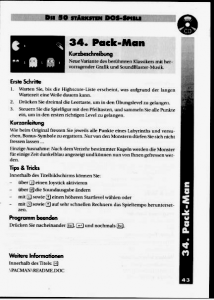