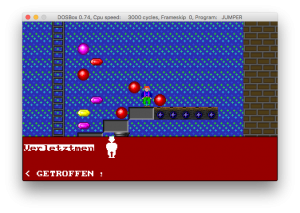 Jumper was planned as the next evolutionary step in game making after Karl Quappe. Jumper (or the state that Jumper is in now) was written about 1996-1997. It was supposed to be a performant “open” Jump’n run” game, which also featured a level editor.

This was the first PC (DOS) projects where I wanted more than I could comfortably handle (or should I say, I lost interest in pursuing further…).

I can’t really remember why I stopped working on it, as with other stuff I guess I just lost interest, once the “tricky” stuff was done. I just wasn’t inclined to do all the hard work that is necessary to completly finish the product. Anyway here a few cornerpieces:

You can get the latest working and compilable version as a DOSBox setup:
Jumper (Win)
Jumper (OSX)

The file is the same as for Karl Quappe and Pacman, switch to the directory:
c:\BC31\Jumper

Editor… some help is available, but not all keys are explained, look at the source code for further explaination. To switch between the split screens (tile/game area) use the TAB key. In some places pressing “?” will give some help (in German). 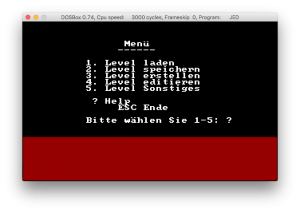 Starting JED you will see a menu, pressing the “number” will take you to sub sections. 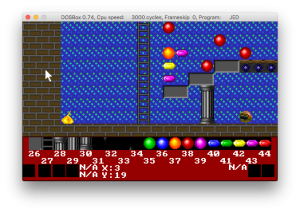 This is the main “level-editor”. A split screen, in the upper half the editor in the lower half the list of all available tiles. Switch with TAB key. 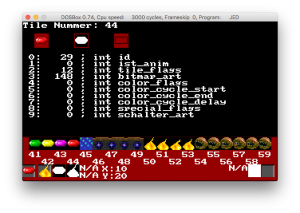 You can inspect the tiles in the editor. On the top, you see the three defining elements of an image, the bitmap, the mask and the “box” in which it fits. 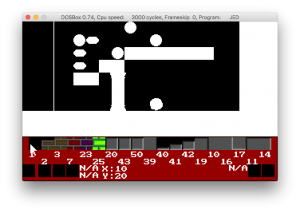 You can switch to “mask” view. Here you can check if collision detection will work as supposed to. 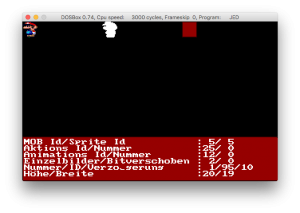 Mobs and sprites can be viewd and edited. 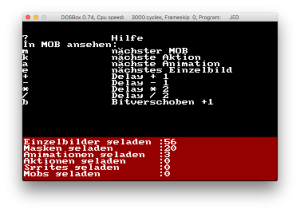 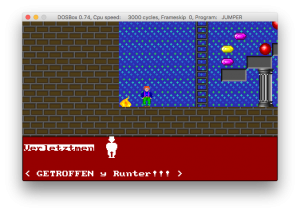 The “game” still looks “debugish”. But a nice music plays, the player falls down due to gravitation, he can collect some of the gems, one of the monsters harms him – and the conveyor belt transports him.
Also you may notice, that tiles can be in the front/background of the sprite.