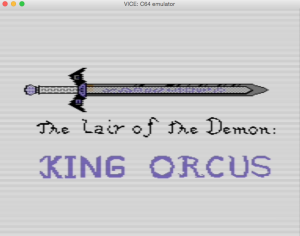 Is that not a GREAT name!

Sadly – as so many other projects – I did not finish it!

Again it is a D&D based game. Quite a bit more sophisticated than NuJa. At least it has a title screen. It plays music (interrupt driven), it is an autostart game. Texts are read from disk during (direct disk access, which considerably slows down all text output!) play and not kept in memory – to prevent cheating! And so on… 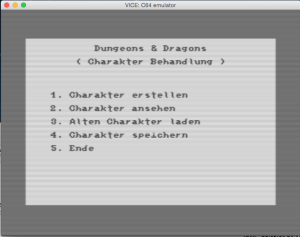 That is probably the reason I did not finish the game, implementing the AD&D character creation process was a huge task on its own account.

On the disk there is also a programm called “Schreiber” which was used to “direct write” the text to disk.