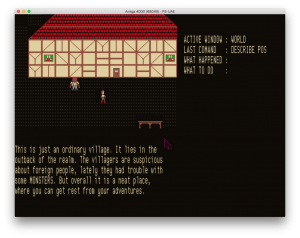 Using my new and nifty KryoFlux to convert Amiga disks to ADF files, I resurrected an old game of mine: Rolli!

Yes, it is another one of those RolePlayingGames.

This is the first RPG I started in C, I never made it publicly available so there is no shame in it, if you never ever having heard of it :-)!

As with so many other things I did, I did not finish this one. Had I been more persistent it could perhaps have become another ADOM (or the forerunner, since this one was done about four years befor ADOM ever saw the light of the day!).

I had some great many ideas, and quite a few are actually implemented: 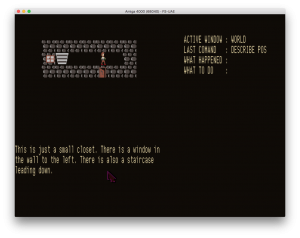 Following an original README I discovered with it: 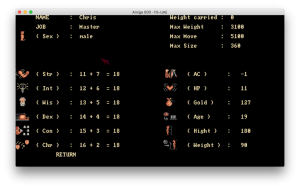 As you can see by the screenshots, I do have a working copy here. But I would like to get my development environment setup correctly for the game befor I “release” it. So bear with me for a while, one day I will make this beauty available and you will be able to finish the game, since it will come with all developement tools necessary to build it!