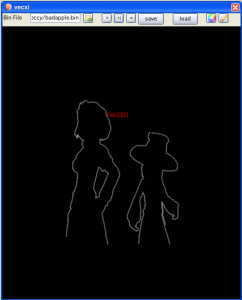 You may have noticed, that in the last 2 months I have been busy with vectrex things again. This includes but is not limited to surfing the internet and looking what other people have been up to.

Quite some time ago I found an interesting page:

Really fascinating, what other people can do with a soldering iron… I have been – and always will be – a software guy, nonetheless “Sprites mods” – I am very impressed and full of awe and respect for your achievment.

The software stuff he created and some descriptions are all online available, so naturally I was quite intrigued to try some things on my own.

I have produced a Vide “runnable” version of BadApple, that was not as “easy” going as I would have expected, but nonetheless achievable. Here I will write some of my stumbling blocks and how I navigated around them.
(I did everything on a 2011 IMac, running El Capitan)

Now you have a 12 MB vectrex binary!

a) To run it, you must tell your emulator to run badapple.bin.
b) The file vec.bin must be in the same directory
c) The emulator must be able to do so!
If it is vecx based there are only a couple of lines to change:
1) the function
unsigned char read8 (unsigned address) /write8 (unsigned address)

must be enhanced with two or three lines (see source) and the file cart.c/h must be included.